Free Shipping on orders over $39.99 (Excludes Hawaii and Alaska)

Founder of The Female Farmer Project, Amazing Grass interviews Audra Mulkern on her views and experiences about the farming industry. We ask openly, she answers candidly – we dig deep. Join us and read what’s next.

For the readers, let’s do a quick one-liner of who you are:

Where are you based?

My favorite places are in a pasture, barn or the capitol building, but often I’m in an airport or in my office/studio in a rural community outside of Seattle WA.

You’re a storyteller for the untold, but what about your story? What was your first look into farming which has ultimately brought you here?

I’m an alumnus of a large software company where I used to do business development and project manage development of very cool 3D software and audio for the internet. In 1999, I had my first child and began to pay attention to who was growing my food and then began to actively seek locally produced food. One of the things I learned in the software is to pay attention to interesting business models and become an early adopter of them. I became a member of one of the first CSA programs (Community Supported Agriculture) in the region. It was eye-opening to experience the vegetables I had never seen or cooked with before – I felt as if my whole life had been limited to lettuce, broccoli and carrots, now I was eating strange looking things like kohlrabi and sunchokes. As my children got older, I became more actively involved with the local farms and tried helping them tell their story utilizing this exciting new social media platform – Facebook.

The time spent with farmers at the market resulted in a book called Rooted In The Valley. The response to the book was so overwhelming that I realized others wanted to know more about their local farms and farmer as well. Then one summer, while standing in the middle of my local farmers market, I was surprised to notice that behind every single table was a woman farmer. Then I was surprised to be surprised. So I took myself to the library and began a months-long search for women’s role in agriculture, looking for stats, pictures, and came up empty-handed. That was the beginning of The Female Farmer Project – a documentary project to illuminate the modern role of women in agriculture. I am currently in fundraising and pre-production-mode of documentary film that does the same for the history of women in agriculture – starting with the original American female farmers – the first nation women. We begin shooting Women’s Work:The Untold Story of America’s Female Farmers in August.

With The Female Farmer Project, you meet an array of people and travel to all these places. What’s one story that hit home for you?

Its hard to point to one story, so many of them are rich in their diversity. They do share a narrative thread that I try to amplify as often as I can. Many of the women farmers I meet are first generation. So they aren’t inheriting the farm, they’re starting from scratch with land and education. Women farmers have a harder time accessing the capital needed to buy land –even though statistically they’re a better credit risk! One of the great efforts by American Farmland Trust is their Women For The Land Initiative, they are helping women to access farmland, education and mentorship in order to be successful farmers and businesswomen.

But if I had to pick one hero, its definitely Karen Washington. She lives in the South Bronx area of New York – an area that suffers from poverty and is the poorest district in the nation. One of the struggles in the South Bronx is access to fresh produce which contrasts sharply with Manhattan, its only five miles away yet home to some the world’s finest dining. Karen had a vision that the empty, abandoned lots in her community could be filled with gardens and people growing food. Despite the odds, she was successful. So successful that she needed to start a weekly market in order to get the food into people’s hands – her mission was that if you come to market hungry, you will not leave market hungry. She recently retired from her job as a physical therapist and has been farming full-time with 3 other women at Rise and Root Farm. She’s in her late 60’s and she’s just getting started!

Now that’s amazing. What about you though? You have a full plate as well. Take us on inside the life. What happens in your every day?

Like everyone else I have to tackle in email inbox, I also manage my social channels and try to read as many articles and white papers about what’s happening in the agricultural world. Some days I work on my keynotes and presentations, other days I grab my camera, throw on my boots and go visit a farmer. I also have a podcast “The Female Farmer Project” with my co-host Kate, who is a future female farmer – we cover topics from financing the farm to different business models for diversifying income. The entire team, including myself are volunteers to this project. I also have a volunteer board of directors for our non-profit film production company, Demeter Productions.

I’m in progress of researching and writing the documentary film with my research assistant, Greta. Also, my writing partner, Debbie and I have been publishing a series of pieces in The Guardian about water issues, agricultural worker suicide and have one publishing soon about farmland loss. The Female Farmer Project team have been advocating and working with legislators to get legislation and funding for behavioral health services for those who work in agriculture and were able to get a bill passed here in Washington State and have bills actively working through Congress for the 2018 Farm Bill.

In order to do and fund all of the above, I take on commercial photography work and its fun to walk into grocery stores and see my photography covering entire walls, or on food packages on the shelves.

I also have two teenaged kids, two dogs and a very supportive husband of 27 years. If it sounds like a lot, it is. But all self-inflicted! I struggle to find time for me, and I know I am not alone in that regard. But my work is extremely fulfilling on many levels.

More about you – describe yourself in 3 words?

And on the topic of the farming industry, how would you describe that in 3 words?

From what you’ve seen, heard, and discovered. What’s the 1 thing we/society should be being paying attention to?

Our Un-Instagrammed Food. One of the most important things we do every day is eat, so shouldn’t we learn more about how who grew or raised it, how it got to our plate, and how we can support the people who make it happen? From the farmers, farmworkers, truckers, dishwashers, cooks, the list goes on of invisible people in our food system. As Rooftop Farmer, Annie Novak says – “ignorance is not bliss, it’s disempowerment.” Instead of just taking a picture, we should empower ourselves and learn a bit more about how our food system works.

…And of course, we just gotta know. What makes you feel amazing every day?

Giving an unsolicited compliment to a stranger. Eating well. Hugging my kids. Amplifying the voices of female farmers.

That’d make us feel amazing too. Thanks for your time and insight, Audra. Where can we find you and stay in touch online? 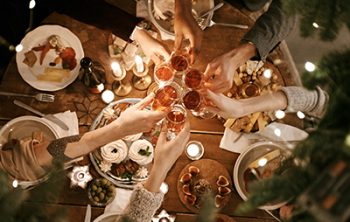